Free shipping on orders over $30 with code: FReeship

And just like that, it’s September – the month of many meanings. Summer + Fall. Virgos + Libras. Labor Day minus (-) the labor. And Ovarian Cancer awareness.

With everything going on, if you’d somehow forgotten that September is Ovarian Cancer Awareness Month (or if you’re anything like me and didn’t know 😳), do not fret. Pear Nova has us covered. This month, in partnership with Aspira Women’s Health, our mission is not only to raise awareness surrounding ovarian cancer but also to support survivors by donating proceeds from the sales of My Candy Rain to research. Because of its rarity, ovarian cancer is not discussed as often as needed.

But we’re here to start the conversation – one question at a time.

What is ovarian cancer?

According to the CDC, cancer is a disease in which abnormal cells rapidly multiply within the body.  The type of cancer is most often determined by the body part where it originates, meaning ovarian cancer is a disorder of rapidly multiplying cells within a woman’s ovaries or related areas. The following diagram illustrates parts of the female reproductive system – look closely at the two ovaries located in the pelvis, and you will have identified the most common points of origin for ovarian cancer. 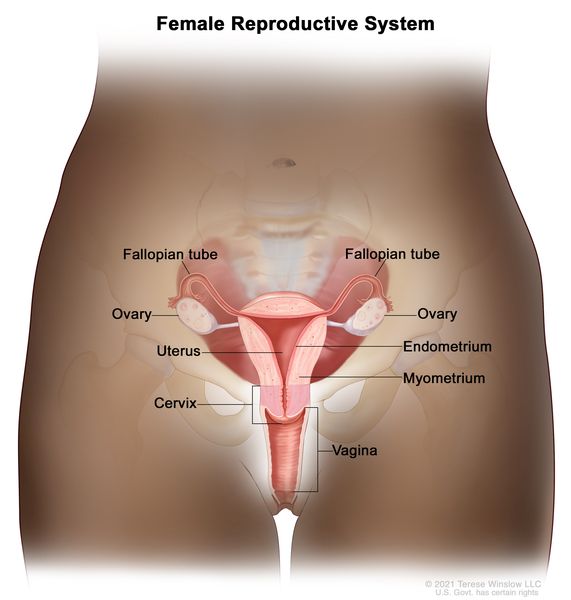 What function do ovaries serve?

Ovaries, like so many of our body’s organs, are multi-functional. But their primary responsibilities are to produce hormones and release eggs. These two functions are vital to reproductive development and fertility, making the protection of our ovaries imperative. Read more about our ovaries’ functions here.

Researchers have developed several theories regarding the cause of ovarian cancer, but the precise origin remains unknown. While we don’t know exactly what causes ovarian cancer yet, we do know what factors increase a woman’s risk for developing it – which brings us to our next question.

What are the risk factors for ovarian cancer?

A comprehensive list of risk factors for ovarian cancer can be found here.

Can ovarian cancer be prevented?

While there are no known methods to prevent ovarian cancer, there are ways to lower your chances of developing it.

Because all methods for decreasing the risk of ovarian cancer are not advisable for everyone, it is recommended that you speak with your doctor about ways to lower your risk for ovarian cancer. Find more information on how to decrease your chances of developing ovarian cancer here.

What are the signs + symptoms of ovarian cancer?

Early cancer of the ovaries is often not noticeable, and symptoms are commonly attributed to other conditions. But if you experience bloating, pelvic pain and discomfort, a frequent need to urinate, or a full feeling quickly when eating, these may be symptoms of ovarian cancer. It is important to note the frequency of these symptoms and any changes in them over time, as this information could be key in determining whether ovarian cancer is the cause. The American Cancer Society claims only about 20% of ovarian cancers are found at an early stage, and late detection of the disease increases its mortality, specifically in women of color. Seek medical attention if you have signs and symptoms of ovarian cancer. Any delay could prove fatal.

Yes. Treatment of ovarian cancer may involve surgery, chemotherapy, or a combination of both.

How can I support ovarian cancer patients + survivors?

Thank you for spreading awareness! Just bought My Candy Rain for family, friends and staff to continue to spread awareness of ovarian cancer and your great product!

Thank you for the good info.

A Toast to Friendship